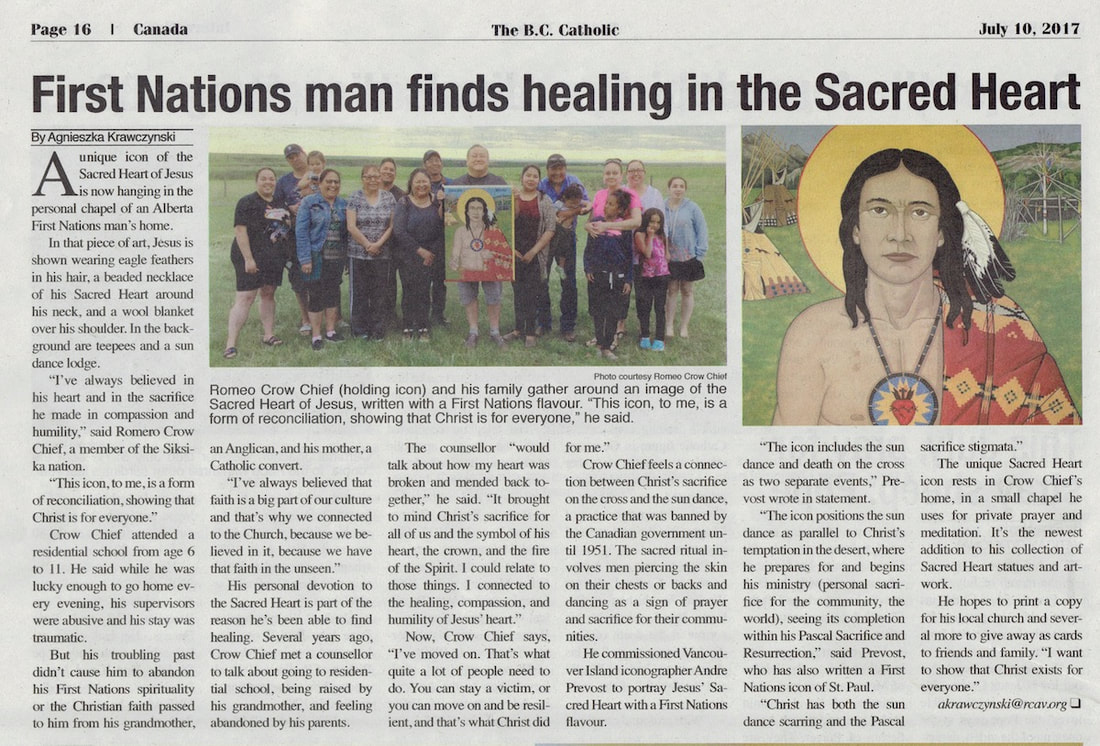 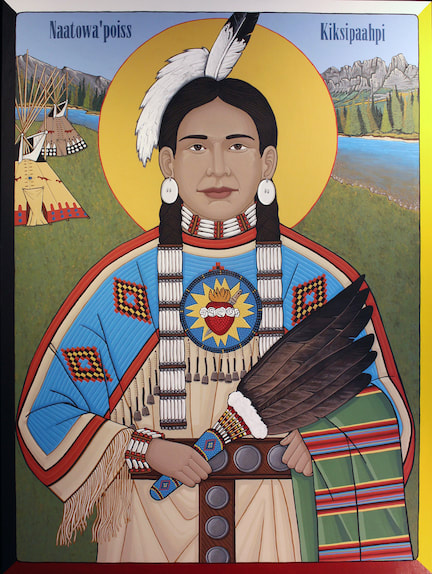 The devotion is the Immaculate Heart of Mary, but the chosen Siksika inscription was to keep ‘Naatowa'poiss Kiksipaahpi’, which translates as Sacred Heart in Blackfoot.

The main difference between the devotions to the hearts of Jesus and Mary is that the one concerned with Jesus emphasizes his divine heart as being full of love for mankind, while devotion to Mary's heart is essentially concerned with the love that her heart has for Jesus, for God. It is not an end in itself, so the love of her heart is meant to be a model for the way we should love God. Her heart is immaculate, that is sinless, and she is the only fully human person who is able to really love God in the way that he should be loved, and chosen to be the Mother of God, the Theotokos.

The icon is positioned within a traditional setting, with Mary being within the community as model and mother.  As with the Sacred Heart icon, it includes the same two Blackfoot tipis, but now, the camp is set near the Bow River in view of Castle Mountain in Alberta. The front tipi still bears the design for Romeo Crow Chief’s family, and the entrances to both face the centre of the icon, to Mary.

The chosen setting of this icon, the lands near Castle Mountain, is significant because it is deeply rooted to the Siksika Nation. The basis of the claim leading to the recent 2017 settlement with the Government, addresses the wrongful taking of the Siksika land in 1911, when it was added to Banff National Park. “As one of our last untouched sacred sites, Siksika will be working collaboratively with Parks Canada to share a unique Northern Blackfoot culture…” Weasel Child.
https://www.rmoutlook.com/article/reconciliation-with-siksika-nation-on-castle-mountain-settlement-complete-20170209

Mary is portrayed in full Blackfoot Regalia, wearing the traditional buckskin dress, which belonged to the commissioner’s mother. It has a turquoise blue beaded yoke with the typical short fringe worn by the Blackfoot. The yoke beading provided a strong connection to the chosen setting of the Bow River and its pristine colour. The yoke is also lined with hanging strands of beads and thimbles.

Instead of the traditional beaded pendent with a neck strap, the pendant is of the same size as used in the Sacred Heart icon, but Mary’s pendent is superimposed over Her Regalia with no neckband. It is reminiscent of the emblazoned heart seen in Western imagery of the Immaculate Heart of Mary. The Siksika beaded pendant is of the same size and colouring as of that in the Sacred Heart icon, but was adapted to depict the Immaculate Heart with the crown of white roses, a flame of love, and pierced by a dagger rather then a crown of thorns as used in the Sacred Heart icon. The dagger is depicted as a Blackfoot blade and handle, referencing the passage of Luke )"a sword shall pierce...") and brings to mind the sorrows she endured during her lifetime, especially during the crucifixion.

In addition to tradition adornments of hair feathers, bone choker, braid pendants, and bracelet, Mary is holding a feather fan which is made from Plains Eagle feathers, and decorated in beading, repeating the designs on Her yoke. The folded shawl on Her left arm is that which belonged to the commissioner's grandmother.

The aim of the devotion and of this icon is to unite the Siksika (Blackfoot) Nation, as all Humanity, to God through Mary's Heart, involving the ideas of consecration and reparation. A person is consecrated to Mary's Immaculate Heart as a way of being completely devoted to God. This involves a total gift of self, something only ultimately possible with reference to God; but Mary is our intermediary in this process of consecration.